History of the Hotel

The name of our hotel was from the own crest. Then three fish are ready. Derived from the Dutch language, translated to the German word "fishing" with "Visser" and over time it became the present name "Wisser".

Our traditional house, directly on the marketplace of Burg, is since 1750 in family property and was previously a pharmacy belonging. While the ladies earlier in the city went about their purchases, the men met in the pharmacy to taste the homemade schnapps. Since 1822 our house is now run as a hotel and restaurant.

Today everything goes to peaceful. International guests feel at ease with food and drink. Professional is the hotel already in the 7th generation of Susanne Skerra, born Wisser Rosolleck. The next and thus 8th generation (son Frank and daughter Nicole) are already involved in the company.

The building has changed repeatedly over time and generations and enlarged. Today, the hotel is equipped with a modern interior, which is the traditional house "guy" justice. 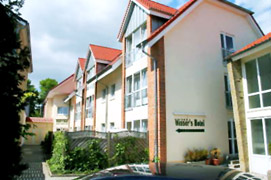 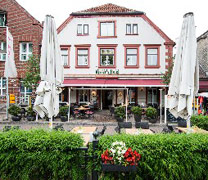